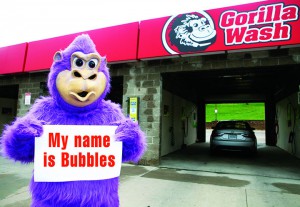 For more than three decades, the face of a friendly gorilla has served as the image for Gorilla Car Wash. However, throughout those 30-plus years, the gorilla has remained nameless, being just another pretty face in the world of car wash marketing. That’s about to change!

Gorilla Car Wash and The Daily Nonpareil are teaming up to give the gorilla his – or her – own identity via a “Gorilla Naming Contest” that starts today.

In addition to picking a name for the furry, friendly figure, a gender will also be selected for the gorilla, since to date no one’s ever determined if the gorilla is a male or a female.

According to Jeff Ballenger, owner of Gorilla Car Wash, the idea for the contest stems from an invitation to have the gorilla take part in The Nonpareil’s 2014 Pro Football Faceoff challenge.

“When The Nonpareil invited the gorilla to become a VIP picker for the Football Faceoff Challenge, they asked what the gorilla’s name was and whether it was a boy or a girl, and we didn’t know the answer to either question,” Ballenger said. “So, we decided to have some fun by holding a contest to create an identity for the gorilla that has been a part of our marketing image for decades.”

There will be two phases to the “Gorilla Naming Contest.”

During the first phase, which will run for two weeks, people will be allowed to vote each day to have the gorilla become either a male or a female. At the same time, based upon which gender they recommend, participants will be asked to submit a name for the gorilla. Participants will be allowed to vote for the gender and submit a name once a day every day during the first phase of the contest. If they desire, participants can submit multiple names by recommending a different name each time they vote.

“This is going to be so much fun,” Ballenger said. “Our gorilla has always been presented as a friendly gorilla, and children love seeing it at our car washes or special events. Soon they’ll know what to call the gorilla.”

Ballenger added that once named, the gorilla will become a more visual part of the community – attending more events and sponsoring more fun projects, such as a kids coloring contest planned for later this year.

But this contest isn’t just about fun; it’s also about free car washes!

Every day during the contest one lucky participant will win a free deluxe car wash from Gorilla Car Wash via a random drawing involving all participants.

Once the gorilla’s name has been determined, there will be a drawing from among the participants who voted for the winning name.

The winner of that drawing will receive a one-year pass for unlimited “Deluxe” car washes.

Ballenger said it’s easy to play, and there’s nothing to buy. Individuals wanting to enter the contest can do so by simply going to www.nonpareilonline.com/namethegorilla and signing up.

Individuals wanting to participate in the Football Faceoff challenge can do so by going towww.nonpareilonline.com/Football_Faceoff.